If you are working with several ThinPrint Ports, each with a different protocol, then check port configuration before printer installation to see which ThinPrint Port sup­ports which protocol. Please also refer to the following information when adding printers to the server man­ually (without Management Center or Management Services).

Client name with TCP/IP and LPD means the real name of the client in the network (= host name). Alternatively, the client’s IP address can be used; this is especially necessary when there are difficulties with the name resolution.

Note! With TCP/IP it is possible to send print data to any client computer run­ning a ThinPrint Client – independent of a session (on a terminal server or vir­tual desktop).

At the client (i. e., a workstation, a thin client or terminal, a gateway appliance or a local print server), the ThinPrint Client automatically assigns every installed printer an ID. The printer_ID can be omitted if

The RDP, ICA and PCoIP protocol assumes all communication with the client, including the client’s unambiguous identification. The printer name is composed of:

Note! With the RDP, ICA or PCoIP protocol print data is sent automatically to the client from whose session the print data was created.

Address information in the Registry

If you use unique printer names in your print environment, you can alternatively store the address information in the Windows registry. To do this, write the address of the ThinPrint Client to:
hkey_local_machine\system\currentcontrolset\control\print\printers\<printer-name>\PrinterDriverData\TPAddr [reg_sz]

and the printer ID to:
hkey_local_machine\system\currentcontrolset\control\print\printers\<printer-name>\PrinterDriverData\TPID [reg_sz] Pooling printer ports with ThinPrint means you can attach printer objects to several ThinPrint Ports – also known as printer pooling. This has the following advantages:

ThinPrint Port pooling is supported by:

Port pooling is mainly used to improve print performance. It should be remembered though, that all ThinPrint Ports in a pool should have the same settings – this can be done automatically using the Management Center or Management Services.  Port pooling with ThinPrint Ports in combination with Output Gateways, Management Center/Services and AutoConnect, however, brings more than maximum perfor­mance; it also makes administration particularly easy and convenient.

When setting bandwidth, note that the bandwidths of a pool are added to each other when all ThinPrint Ports print simultaneously. Detailed information can be found in the technical description ThinPrint Ports. 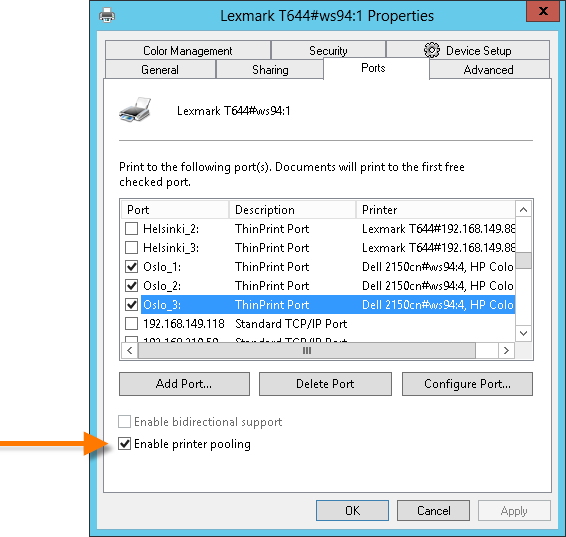